The Etna eruption which began in October and only ended in December 2015 was one of the a strong explosive activity was recorded at year-end, it ranks among the most violent of the last twenty years and produced volcanic sand has reached the Reggio Calabria coast.

The frequent explosive activity of the crater southeast from 2010-2013 did grow fast the top of Mount Etna of nearly one hundred meters , a record for an active volcano .

Anyone whoin the past made Etna Sicily adventure excursions in Bove Valley, along the classical itinerary  Piano del Vescovo-Acqua Rocca-Cannalone dei Faggi, will be amazed at no Longer finding many of the places which characterized the excursion once you got to the bottom of the valley. Piano del Trifoglietto no longer exists, nor does the Gino Menza shelter or the great centuries-old beech trees forming a little wood, or the lowest volcanic dykes. Everything has been covered by lava severa l meters thick.

Last spring I made an excursion which I recommend to all those who toani to see how everything has changed there and the new interests that today Bove Valley can offer ex-cursion-lovers after the eruption. First you take the classical itinerary along the “sand grooves”.

After reaching the Montagnola on foot or by funicular, you then get to the brow of Bove Valley and you follow it briefly eastwards until you recognize the long” sand groove” which slopes steeply doom to the bottom of the valley. 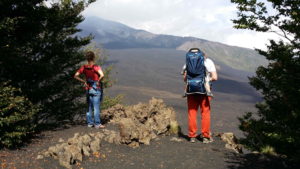 Usually you have to go jumping from boulder to boulder until you reach the limit of the new lava flows. Anyone who has made this descent in the past will at   once realise that at one time you would have gone on down in the sand for at least another thirty meters. Now the way is blocked by the still lukewarm tangle of dozens of lava flows heaped up on one another, entwined and superimposed in an interminable succession of different moments of an endless eruption. 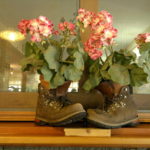 It is interesting to see the morphologies that can already be observed in the immediate vicinity along the lava flow, especially if you have time to proceed towards the left, flanking the flow towards its mouths (it takes at least two hours to reach them). Those with less time available will climb slightly up the groove until they come to a clear path, after a few dozen meters, which unmistakably intersects the groove.

You take this, heading east. This path becomes fainter and fainter as you climb up the side of the valley. This is due to the continual passage of people coming from the sea, and alpine guides, who took part in the operation of diverting the lava flow when there appeared to be imminent peril for the village of Zafferana. The path winds gently up the side of Bove Valley until you come to the crest of the “Donkey’s back”, It is very easy to miss it if visibility is poor because at some points  is interrupted and you have more or less to guess where it starts again, observing the ground along the wall from a distance and making out where the new stretch of path should begin.

You climb back up amid clusters of astragalus and little senecio and rumex plants. In June the flora provides a truly extraordinary  spectacle, with multicolored florescences which even cover vast stretches, dotting those spurs on which very fine black sand and hard greyish basalt alternate with very ancient amber-coloured tufa.

As you climb up the west wall of Bove  Valley, you discover new areas, panoramas of stretches of the latest lava flow and of the upheavals it has caused, for example, in some existing dykes. 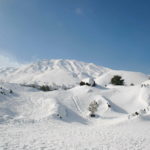 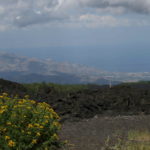 As you climb on up, ai a certain stage the path bends southward, flanking a precipice. Soon afterwards, the path seems to be interrupted, but you just have to go on using your intuition, heading south-east, to find it. It then goes on up the spur without being very steep, and you get different views all the time until you reach the crest of the “Donkey’s back” near a tablet commemorating a member of the Italian Alpine Club. From up there you can observe, in their grandiose entirety, the immense lava fields formed by the eruption; you see how the arms of the lava flow turapped round the base of Monte Calanna.

From here you go down the opposite face, going a little to the right. Here you will come to a path which is easy to make out. Following the latter, you come into a neafforested pine wood and then, after less than half an hour, you see the gate into the Forestry  area and the tarmac road leading to the Sapienza shelter and the funicular. 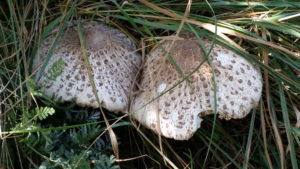 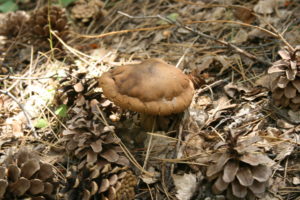 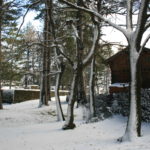 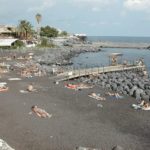 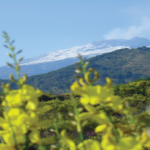 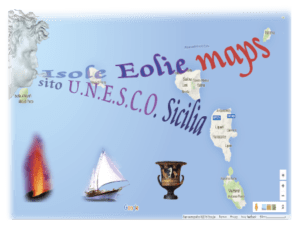